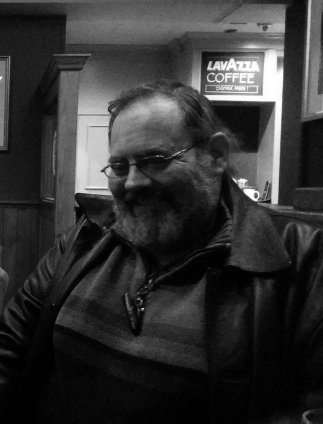 John Linwood Grant is a full-time writer and editor who lives in Yorkshire with a pack of lurchers and a beard. He may also have a family. A confirmed agoraphobic, he hides from view quite a lot, though pale ale and longdogs may lure him out into the open. He started life as a bookshop manager (it was a surprising birth), but also has a background in life sciences, health service management and sundry other stressful things. He likes rescuing dogs and going to sleep.

His writing crosses a whole load of genres, although he’s particularly fond of dark Victorian and Edwardian themes, such as his recent novella A Study in Grey, which also features Sherlock Holmes. Despite this, he makes regular forays into contemporary weird fiction, science fiction, grim fantasy and other imaginings. He has been published in a wide range of anthologies and magazines, with stories ranging from madness in early Virginia to questions about the monsters we ourselves might be.

Current projects include his Tales of the Last Edwardian series, about psychic and psychiatric mysteries, plus sundry oddities such as Weird Wolds (warped tales of the ‘other’ Yorkshire), and hoodoo in the nineteen twenties.

His popular, if eccentric, website greydogtales.com covers weird fiction, weird art and even weirder lurchers. And it’s more fun than this site.